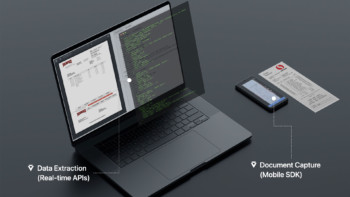 Veryfi API version 8 release is slated for a general availability release in mid Q4 2021, but is already ready for preview in a beta phase.

Veryfi Lens is a beautiful custom camera binary (framework mobile SDK) you can drop-into your iOS and Android app to give your mobile product machine vision superpowers in minutes. Available for test drive inside the Veryfi Portal.

0 Click capture. When scanning a receipt, no need to press any buttons to grab the document. Veryfi AI will do that now for you.

By default this feature is off but you can active it inside Lens > Settings by opening the More Dropdown menu (shown below) under “Handsfree Document Capture”.

Speak the vendor name, total cost, any tags or notes and let Veryfi handle the rest converting the expense into an actual receipt.

You can see this inside Lens under Shield from the More Dropdown (shown below).

If you built your app using React Native or Cordova (formerly known as PhoneGap) and need a fast way to integrate Veryfi Lens, then we have you covered with Plugins built by Veryfi to bridge your app with Lens.

If there’s a plugin you need to bridge Veryfi Lens with your app then let us know by contacting support@veryfi.com

Now you have a quick and easy way to receive updates on system performance issues real time without contacting IT specialist. We hope this page will always stay green and you won’t receive ANY announcements and alerts about interruption of service. But if you do, you will know what’s going on immediately and what we are doing to fix it.

Go to the link. below and SUBSCRIBE TO UPDATES (see screenshot) to never miss a beat.

Every Veryfi account comes with a BRONZE support plan (email support only). If you need more and a peace of mind then we recommend either our new robust GOLD or SILVER plan. SILVER gives you an Account Manager and Priority Support while GOLD goes one step further with a Dedicated VPC.

Your account manager will use a bug tracking system which ensures those pesky bugs are easily detected and squashed. At Veryfi we love using Atlassian tools like Jira and Confluence for this purpose. Whilst we aim to resolve all customer issues in a timely manner, SLA customers will always get a priority.

If you do not have an SLA with Veryfi and would welcome such an addition to your experience, please reach out to us by replying to this email or sending a g’day message to support@veryfi.com

An SDK is a set of tools (pre-written code) for third-party developers (you) to use in your producing application/s using a particular framework or platform like the Veryfi API. It’s the fastest and most convenient way to engage with an API because all the heavy lifting of authentication, abstraction, etc… are all taken care of for you in the language you work in. We are happy to announce, C# and Ruby SDKs have been added and published in the API portal.

Email us at support@veryfi.com or schedule a 1:1.